I have so many things to share with you this week that I’m not even sure where to begin! So here’s an overview. I have Christmas shopping/decorating, an awesome cake (and decorating), and Chinese food, which is always amazing.

I guess I’ll do two separate blog posts today, so stay tuned for the other one! I think the cake deserves its own post! 🙂

We were planning on using Monday for a Christmas decoration shopping day. Some other (more boring) things got in the way and we switched the trip to Thursday. This was originally what I was planning to post about this week, so I’m still going with it anyway.

Although we didn’t find much in the realm of Christmas decorations, we did at least get some lights and tinsel garland. This weekend we used the garland to decorate this wonderful pole in the middle of our living room, like this.

I can’t help laughing when I look at the pole. It reminds me of some sort of Christmas Dr. Seuss… something.

The idea also crossed my mind to make our own glass ornaments, an idea that was reaffirmed by my best friend, who is also making her own. What can I say, enthusiasm is contagious! It also gives my husband and me an excuse to go Christmas shopping again! So that’s definitely something to be excited about as well!

I also had the idea to make our own Christmas stockings, so I’m very much looking forward to that! It’ll be a fun little project that I’ll be posting about on here, if I do in fact get around to making them at all.

While we were in the fabric store, I wanted to check online to see how much material we would need for each stocking. I had my own ideas of how much that would actually be. After looking it up, it turns out that I guessed EXACTLY right! So that pretty much made my night right there.

What am I saying? We had already had Chinese food, so THAT kicked off the night in the best possible way!

As you’ve (probably?) gathered, I have to eat gluten-free. I have to say that I absolutely love it! I haven’t really ever felt deprived during my year-and-a-half of eating gluten-free, and have actually used it as an opportunity to learn about and try some things that I never otherwise would have. It’s been an amazing journey!

Anyway, we were both hungry and happened to be near a Chinese food restaurant. It just so happened that Chinese food sounded absolutely incredible at the time, so we decided to go for it!

Our area is pretty decent when it comes to gluten-free dining, so we were planning to check out the menu to see if they had anything available, hoping that they would.

It turned out so much better than I had expected. Not only did they have gluten-free options, but those options also included the traditional breaded chicken! All they had to do was switch out the soy sauce.

I was beyond thrilled!

We got a plate of General Tso’s Chicken to split, and it ended up being the perfect amount for us. Not to mention the beautiful little carrot flower they used as a garnish. Such a cool idea! (Okay, I don’t know, maybe I’m just slow and a lot of places do this… But I don’t go out much.) 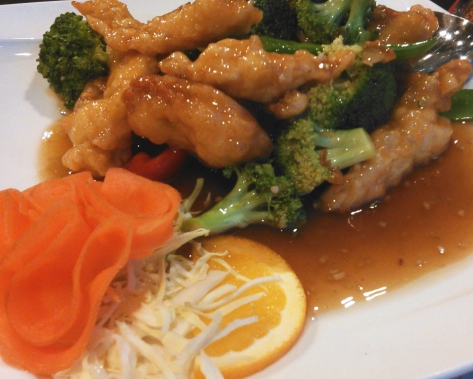 I can honestly say that it was one of the happiest, most satisfying food moments of my life. Eeek! I can have normal Chinese food again!

We also went to Whole Foods and got some things from the bulk section. Yay for cheap things I’ve been needing! Love it!

So that was our trip! I hope you have a wonderful Monday! And I’ll see you later with a post for a gluten-free cake! Be sure to like my Facebook page for more updates. I look forward to seeing you there!

One thought on “Monday (Part One) Christmas Decorating And Chinese Food”